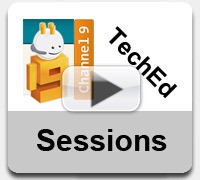 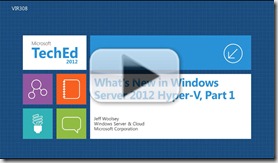 This two-part session overviews the new and updated features for Windows Server 2012 Hyper-V, including Multitenancy, High Availability, flexibility infrastructure, and Scale and Density. Over the two sessions, it provides a complete summary of why Windows Server 2012 Hyper-V is the best virtualization platform for server consolidation, key workload support and VDI, as well as the ideal platform for Infrastructure as a Service, including Private Cloud, Hybrid Cloud, and Public Cloud. 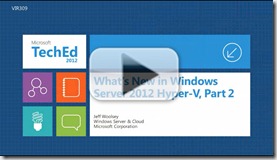 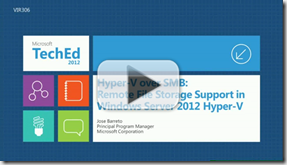 In this session, we cover the Windows Server 2012 Hyper-V support for remote file storage using SMB 3.0. This introduces a new first-class storage option for Hyper-V that is a flexible, easy to use and cost-effective alternative to block storage. We detail the basic requirements for Hyper-V over SMB and outline the specific enhancements to SMB 3.0 to support server application storage, including SMB Transparent Failover, SMB Scale-Out, SMB Multichannel, SMB Direct (SMB over RDMA), SMB Encryption, SMB PowerShell, SMB performance counters and VSS for SMB File Shares. We conclude with a few suggested configurations for Hyper-V over SMB, including both standalone and clustered options. 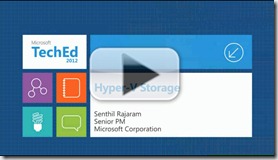 In this session, we cover the changes to the Windows Server 2012 Hyper-V storage stack. We dive into the enhancements around the new virtual disk format, integrating new storage industry innovations around offloaded data transfer and large sector disks, and detail the new storage options for Hyper-V including Storage spaces and SMB file storage. We present performance and scaling improvements and conclude the session with sample configurations, including both standalone and clustered options. 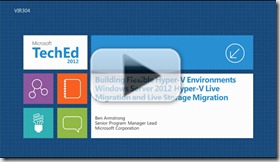 To maintain optimal use of physical resources and to be able to easily add new virtual machines, you must be able to move virtual machines whenever necessary without disrupting business. In Windows Server 2012 live migrations are no longer limited to a cluster and you can now move both Virtual Machines and Virtual Machine storage using clusters, SMB shares and even just a simple network cable (no shared storage) – with no downtime. You have ultimate flexibility in your virtual infrastructure and further, when combined with features such as Network Virtualization, virtual machines can even be moved between hosts that are on different network subnets. 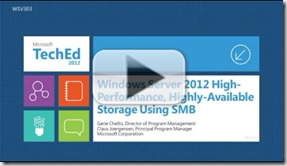 The Server Message Block (SMB) Protocol is the file sharing protocol that is used by default on Windows computers. To support this, Windows Server 2012 now provides a vast set of new SMB features with an updated SMB protocol that greatly enhance the reliability, availability, manageability, and performance of file servers. This session overviews all the new SMB related features that Windows Server 2012 provides, and how to use them in your organization. 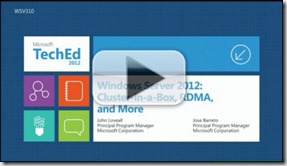 A new wave of hardware is planned to be released by Microsoft’s industry partners with Windows Server 2012 designed to provide a true volume platform for Continuous Availability. Come to this session to find out the details about what hardware is inside these new “Cluster-in-a-Box” systems and see prototypes up close and running live demos. These systems combine server blades, shared storage, internal cabling, and redundant power supplies into a single chassis targeted at the volume server market. They provide expansion slots to optionally incorporate RDMA-capable NICs that, when combined with the right storage drives and controllers, CPUs, and chipsets will allow Windows Server 2012 to move data at bus and wire speeds from the drives across the network. This new hardware, when combined with Windows Server 2012, will enable game-changing possibilities for your next systems. Come learn all the details and see what you can start to look for in product offerings from your industry partners. 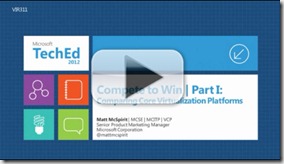 This is a must-see session for anyone who is comparing virtualization offerings! In this session, we review the key capabilities of Hyper-V, in both Windows Server 2008 R2, and Windows Server 2012, in comparison with the alternative virtualization technologies in this space, focusing on what differentiates the offerings. We spend time dispelling common myths around Hyper-V enabling you to more effectively compare the different solutions, both now, and in the future. If you need to know how the Microsoft virtualization stack compares to other offerings, this is the session for you! 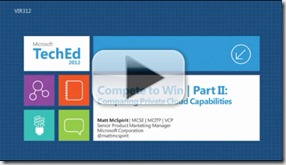 Another must-see session for anyone comparing private cloud and systems management technologies! Building on Part 1, in this session, we focus on comparing and contrasting the private cloud and systems management technologies offered by both Microsoft and other hypervisor providers, and learn how, with System Center 2012, Microsoft has brought to market the most integrated, comprehensive suite of technologies for managing your entire infrastructure, from desktop to the datacenter, across physical and virtual, into the cloud. We compare and contrast technologies across application and workload monitoring, backup and application protection, service management and automation and much more! If you’re looking at building a comprehensively managed infrastructure, or moving towards a private cloud, this session is for you! 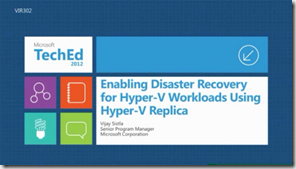 Most SMB customers do not have robust disaster recovery plans despite experiencing around six outages in a year. This is because current solutions for disaster recovery are expensive, complicated to set up, and generally don’t work well in virtualized environments. Hyper-V Replica offers an affordable DR solution for virtualized workloads. It is included with Hyper-V, works with commodity storage, and has an inbox UI to set up standard DR flows. It also has a rich API surface (PowerShell and WMI) which provides extensibility for management partners (e.g., extend the inbox UI to an enterprise-grade DR solution) and hosting service providers (e.g., offer DR as a service).